How Do Patents Work?

On a recent trip to the airport I thought of a nifty invention.  I can’t tell you what it is but I can tell you there is nothing like it on the market today.  As I sat on the plane back to Minnesota I thought more and more about my idea.  When I arrived home I went to the U.S. patent website http://www.uspto.gov/.  While there I discovered that the patent process is challenging and can be intimidating if you’re not familiar with it.  If you’re a novice/amateur inventor this can squelch your creativity.  After looking at the patent website I quickly decided I needed help so I called David Windorski, (we met at a marketing conference last year).  I was immediately captivated by David Windorski, after our first encounter I felt a need to know more about the man who invented the Post-it© Flag Highlighter.

David Windorski is a Mechanical Engineer who recently semi-retired from 3M Company after thirty-seven years. The most recent twenty-nine years were in the Post-it© Note division. He was a Lead Specialist, New Product Development Engineer and was responsible for conceiving, developing and introducing new products into the marketplace. His personal expertise is in end-user research and Generating new product concepts. He currently continues to work for 3M Company as an independent contractor, in addition to contracting work to Tung Yik International, LTD in Hong Kong. A feature case study was written about him in Marketing by Kerin, Hartley, and Rudelius.

Did I mention that he has  been on OPRAH!! http://www.oprah.com/Making-It-Big Yet that is not his greatest accomplishment.  He has introduced about forty products into the marketplace, has fifty allowed patents and fifteen pending patents. When I met with David the week after thanksgiving he hinted to another idea he is working on.  He couldn’t tell me the idea but from what I have learned about him I am sure it will be fun, and I am excited to see or hear more.

David, Cecilia, and I met at the Woodbury Café, and I told him about my invention, and experience at the U.S. patent website http://www.uspto.gov/.  David said he wasn’t surprised; in fact he had expected that.  He  handed me a packet of information about patents that was condensed, and concise, but it still seems confusing.  He smiled and said “the site was very good, but offered too much information.”  “I just whittled it away” he said, as he handed me the packet, “so when we talk, we can go through it, and it can help you, by telling you how much money it might cost, and what obligations you might have.”  I found it interesting that once you get a patent you’re not in the clear yet. David says “the main thing that people think is that the patent protects your idea. It doesn’t you have to protect it (your idea).”

So David first explained two types of patents that inventors should know about:

“Utility Patent-Issued for the invention of a new and useful process, machine, manufacture, or composition of matter, or a new and useful improvement thereof, it generally permits its owner to exclude others from making, using, or selling the invention for a period of up to twenty years from the date of patent application filing, subject to the payment of maintenance fees.”

Page one of Utility Patent for Post It Highlighter

“Approximately 90% of the patent documents issued by the PTO in recent years have been utility patents, also referred to as “patents for invention.”

“Design Patent– Issued for a new, original, and ornamental design for an article of manufacture, it permits its owner to exclude others from making, using, or selling the design for a period of fourteen years from the date of patent grant.  Design patents are not subject to the payment of maintenance fees.”

Ok so you come up with your idea, and you patent it, put a few thousand dollars into it, you have a couple of options you make the item or you can sell the patent, because it’s property.

Let’s say you’re going to make the item yourself a manufacturer decides to use your idea because they can afford to produce your product faster and cheaper.  Let’s go further and say the manufacturer gets their version of the product to market faster than you even though I copied your Idea.  So you decide to go to the manufacturer and say cease and desist I have a patent for this idea.  If you don’t quit there will be legal action, and if the manufacturer is a “nice guy” he will stop.  If he wants to be a “jerk” he can say take me to court. Fighting a big corporation can be a long drawn out daunting task.

So you try to defend it by showing the judge the patent certificate and the judge could say this idea is not patent able.  Well the patent office will not help you defend your patent you would need to get a patent attorney.

So to patent or not to patent, that is the question? Earlier I mentioned David Windorski has an idea in the works and what he says he doesn’t want to make the product he wants to sell it to a manufacturer, then I’m out of it, I get a lump sum and I don’t have to invest too much time.

What David Windorski is suggesting is developing a patent-able idea, selling it so the patent. He says “think about it” he said “I have a great product idea yet I have no distribution, no manufacturing facility, and I don’t have funding.  Now I could get royalties or licensing because it’s a tangible product but first I would need to do market research and see if would sell.  Well I don’t want to do that, so I would just sell it out right I could offer it to a manufacturer for $20,000 and walk away.

David Windorski has been asked to speak on this topic at colleges, universities and offers consulting services to businesses around the globe. He says “the students and even some of the professors say “wow Dave you are telling a really bleak story,” well I’m telling it the way it is.

So how do you get started with patenting your idea without thinking about manufacturing the product?  David says, “You can’t patent an idea.”  According to the U.S. patent website

Sitting and listening to David Windorski made me wonder who inspires an inventor like David so I asked who he admired and he immediately responded Art Frye I know the guy he is a good friend of mine he invented the post it note. 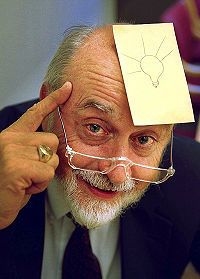 Arthur Fry (born 19 August 1931) [1] is a retired American inventor and scientist. He is credited as the co-creator of the Post-it note, an item of office stationery manufactured by 3M.

“All of what I did was because of what he did and that’s what invention is expanding on an idea.  That idea made a lot of money but he had a lot of problems with people accepting the idea.  You see that’s a downside to working for an organization.  Being on my own I can say I am going to start a new venture but as an organization they have a budget.  I have to prove that its right and do market research before I even get to the prototype.  A patent could cost from five to twenty thousand dollars and then it could take years to get, then there’s office actions.  That’s when the patent office says “this is not patentable for these reasons.”  Then you have to get an attorney and prove that it is patentable.  Once you finally get the patent you have to pay a fee for that and then there’s the maintenance fee every three to five years.”

From what I learned from David you have to have your ducks in a row if you’re thinking about patenting your idea.

In our next post we will  talk  about  creativity; in the mean time check out these cool links.

Understand the Reasons for Demands and Constraints